A new study published today in Frontiers in Marine Science used the data gathered by the Sea Around Us project in a unique effort to reconstruct the fish catch at global scale, to reveal that in the past 60+ years, the practice of towing giant fishing nets along the sea floor has caused the extraction of 25 million tonnes of fish that live 400 metres or more below sea level, leading to the collapse of many fish populations in a “boom and bust” pattern of exploitation.

The new estimates suggest that 42 per cent more fish have been caught by countries than they reported to the Food and Agriculture Organization (FAO) of the United Nations. “Our study shows that there is systematic underreporting of the real catch. This means that fisheries managers are making decisions based on incorrect data, which has dramatic consequences for marine ecosystems,” said Lissette Victorero, lead author of the paper and a PhD student at the National Oceanography Centre in the United Kingdom. 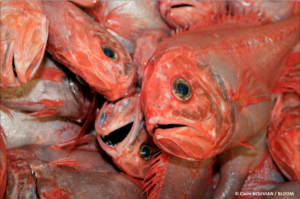 The study, which was published this week in Frontiers in Marine Science, examines the historical catch of 72 deep-sea fish species taken by bottom trawlers around the world, many of which are exploited to unsustainable levels and several of which are no longer commercially viable.

For example, Roundnose grenadier estimated catches for the North Atlantic were greater than 60,000 tonnes in 2001, but the stock was overfished so fast that a moratorium had to be imposed in 2006. “One of the reasons behind this collapse is the fact that trawls are not selective: they catch everything and anything, which means that young grenadiers that have not yet reached full reproductive development are caught along with adult grenadiers, decreasing the ability of the population to recover,” said Deng Palomares, co-author of the study and the Sea Around Us Project Manager at the University of British Columbia.