You Are Here: Home » Latest News » Fisheries » The devolution of the seas: the consequences of oceanic destruction

The devolution of the seas: the consequences of oceanic destruction 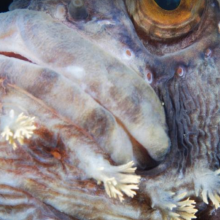 Of all the threats looming over the planet today, one of the most alarming is the seemingly inexorable descent of the world’s oceans into ecological perdition. Over the last several decades, human activities have so altered the basic chemistry of the seas that they are now experiencing evolution in reverse: a return to the barren primeval waters of hundreds of millions of years ago.

A visitor to the oceans at the dawn of time would have found an underwater world that was mostly lifeless. Eventually, around 3.5 billion years ago, basic organisms began to emerge from the primordial ooze. This microbial soup of algae and bacteria needed little oxygen to survive. Worms, jellyfish, and toxic fireweed ruled the deep. In time, these simple organisms began to evolve into higher life forms, resulting in the wondrously rich diversity of fish, corals, whales, and other sea life one associates with the oceans today.

Yet that sea life is now in peril. Over the last 50 years — a mere blink in geologic time — humanity has come perilously close to reversing the almost miraculous biological abundance of the deep. Pollution, overfishing, the destruction of habitats, and climate change are emptying the oceans and enabling the lowest forms of life to regain their dominance.