You Are Here: Home » Latest News » Science » The Mysterious World of Deep-water Corals

The Mysterious World of Deep-water Corals 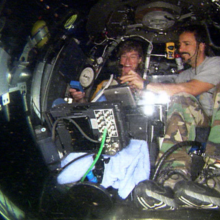 NOAA Fisheries zoologist and deep-water corals expert Martha Nizinski explores the little-known ecosystems of the continental shelf.
Martha Nizinski was more than 400 meters below the surface, moving slowly among the strange life forms of the deep sea, when something large crashed against her submersible. She and three other scientists were exploring the continental slope off the Carolinas, and whatever rear-ended them was in a blind spot behind the vehicle. For a few tense moments, she couldn’t see what it was or what it wanted. That was Nizinski’s first voyage to the bottom of the sea.

Nizinski had recently received her PhD when the scientists planning that expedition recruited her. They needed an invertebrates expert, so they offered Nizinski a coveted spot in the cramped sphere of the submersible.

“It was the turning point in my career,” Nizinski said. “I was hooked,” despite the close encounter with what turned out to be a swordfish—and a big one. Swordfish don’t have many predators, and they tend to be bold.

Posted on May 6, 2014May 13, 2017Categories Fisheries ScienceTags coral fishing research