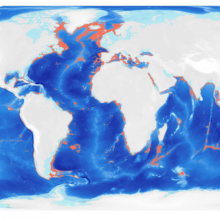 Over the past ten years, NEAFC has closed a large number of areas on the high seas of the Northeast Atlantic to bottom fishing to protect coral and sponge ecosystems. However, other important deep-sea habitats remain vulnerable to the impact of bottom fishing, in particular bottom trawling. Moreover, few limits have been established for the catch or bycatch of many of the species caught in the deep-sea fisheries in the Northeast Atlantic.

“The new regulation is an important milestone for the protection of deep-sea habitats and vulnerable marine ecosystems. Now, NEAFC must effectively implement the regulation in order to achieve sustainable deep-sea fisheries and protect additional ecosystems in the North East Atlantic,” said Matthew Gianni, co-founder of the Deep Sea Conservation Coalition and advisor to The Pew Charitable Trusts.

After a three year process of review designed to bring the management of deep-sea fisheries into line with a series of UN General Assembly resolutions, the regulation adopted by NEAFC today represents a significant improvement to its existing deep-sea fisheries regulations.

“Most of the species found in the deep-sea are highly vulnerable to depletion and the catch of the majority of these species is not subject to any NEAFC quotas or limits” said Björn Stockhausen of Seas At Risk. “NEAFC now needs to do a better job in setting strict limits on the catch of deep-sea species and manage the fisheries to prevent the bycatch of the most vulnerable species such as deep-sea sharks which are recognized as endangered.”

The European Union (EU) and Norway were instrumental in negotiating the new regulation. For many years the EU has supported the implementation of United Nations General Assembly resolutions that require improvements in the protection of deep-sea species and habitats from the impact of bottom fisheries. Coincidentally, the EU is currently reviewing its domestic deep-sea fisheries regulation for EU waters and the high seas in the North East Atlantic. European Commissioner, Maria Damanaki, has submitted a proposal for a new regulation to the European Parliament and Council of fisheries ministers which would phase-out the use of bottom trawls and bottom gillnets for deep-sea fisheries.

The EU Council of fisheries ministers, made up of all 28 member state fisheries ministers, is currently debating the proposal. Recently bottom trawling has been banned by Portugal on over 2 million square kilometres surrounding the Azores and Madeira Islands to protect deep-sea corals, sponges and other deep-sea ecosystems found on seamounts in the region.

“We are urging EU fisheries ministers to advance a successful reform of the European Union’s deep-sea fisheries regime in line with their United Nations’ commitments, and call particularly on Italy, which assumes the rotational EU Presidency in July, to secure a speedy conclusion of the negotiations.” Gianni said.