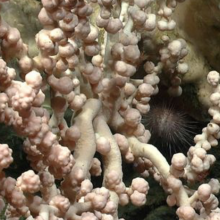 A hidden world thrives more than a mile and a half beneath the waves, in the inky blackness roughly 80 miles offshore the Atlantic’s coastline. There you can find corals in all colors of the rainbow and a menagerie of sea life with evocative names, such as the whiplash squid, dumbo octopus, sea butterfly (which is actually a snail), sea toad and tonguefish. See more images of the deep-see life in “Exotic Deep-Sea Canyon Life at Risk (Gallery ).”

Scientists know little about this amazing life offshore and the vibrant gardens of deep-sea coral communities, but thanks to a series of U.S. National Oceanic and Atmospheric Administration (NOAA)-led explorations over the past several years, what they have recently uncovered is remarkable.

Today, the Natural Resources Defense Council (NRDC) released a new report, “The Atlantic’s Deep Sea Treasures: Discoveries From A New Frontier of Ocean Exploration,” cataloguing many of the new findings since 2011, and urging policymakers in the U.S. mid-Atlantic states to protect these vulnerable and biologically-rich ecosystems now, before it’s too late.

For more, go to: news.yahoo.com/coral-thrive-off-u-atlantic-coast-threatened-op-172310191.html