You Are Here: Home » Latest News » General » Hopes – and Fears – for Ambitious Project to Map the Entire Seabed

Hopes – and Fears – for Ambitious Project to Map the Entire Seabed 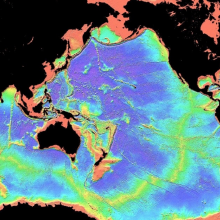 To date, only 5 percent of the sea floor has been mapped in detail, but an international consortium plans to map the rest over the next 13 years. The results could revolutionize our understanding of deep-sea biodiversity.

When a 9.1 – magnitude earthquake struck off the coast of Sumatra on December 26, 2004, a tsunami quickly formed, sending a wave as high as 80ft (24m) across the Indian Ocean that, along with the earthquake, killed more than 230,000 people.

But it wasn’t just the earthquake that propelled the finger of the highest wave: It was also the topography of the sea floor. For instance, along the Southwest Indian Ridge, a skinny contour of shallow water south and east of Madagascar, the 2004 tsunami was as high in some places as it was off the coast of India.

A better map of the seabed could lead to the ability to warn people where a tsunami will be biggest, potentially saving lives, and better tsunami prediction models are just one reason for an exceedingly ambitious new effort, launched in June, to map the entire sea floor by 2030. The resolution will vary by depth, but will generally be 328ft (100m). Just 5 percent of the ocean, which covers 71 percent of the Earth’s surface, is currently mapped in such detail. We know more about the topography of other planets’ moons than we do of our own ocean floor.