You Are Here: Home » Latest News » Mining » The secret on the ocean floor

The secret on the ocean floor 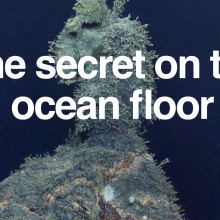 A wave of pioneers is poised to scoop up treasure from the deep sea. But was this ocean mining boom sparked by a 1970s CIA plot?

In the summer of 1974, a large and highly unusual ship set sail from Long Beach in California.

It was heading for the middle of the Pacific where its owners boasted it would herald a revolutionary new industry beneath the waves.

Equipped with a towering rig and the latest in drilling gear, the vessel was designed to reach down through the deep, dark waters to a source of incredible wealth lying on the ocean floor.

It was billed as the boldest step so far in a long-held dream of opening a new frontier in mining, one that would see valuable metals extracted from the rocks of the seabed.

But amid all the excited public relations, there was one small hitch – the whole expedition was a lie.

This was a Cold War deception on a staggering scale, but one which also left a legacy that has profound implications nearly half a century later.