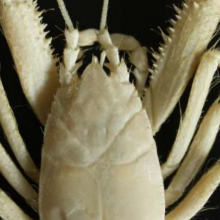 We have only known about the existence of the unusual yeti crabs (Kiwaidae)—a family of crab-like animals whose hairy claws and bodies are reminiscent of the abominable snowman—since 2005, but already their future survival could be at risk.

New Oxford University research suggests that past environmental changes may have profoundly impacted the geographic range and species diversity of this family. The findings indicate that such animals may be more vulnerable to the effects of human resource exploitation and climate change than initially thought.

Published in PLoS ONE, the researchers report a comprehensive genetic analysis of the yeti crabs, featuring all known species for the first time and revealing insights about their evolution. All but one of the yeti crab species are found on one of the most extreme habitats on earth, deep-sea hydrothermal vents, which release boiling-hot water into the freezing waters above above them.

The research was conducted by ecologists from Oxford’s Department of Zoology, Ewha Woman’s University in Seoul, South Korea and additional Chinese collaborators.

The results reveal that today’s yeti crabs are likely descended from a common ancestor that inhabited deep sea hydrothermal vents on mid-ocean ridges in the SE Pacific, some time around 30-40 million years ago.

By comparing the location of current yeti crab species with their history of diversification, the authors suggest that the crustaceans likely existed in large regions of mid-ocean ridge in the Eastern Pacific, but have since gone extinct in those areas.