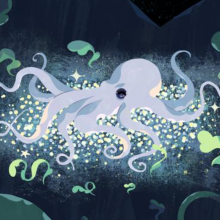 In 2007, Bruce Robison’s robot submarine stumbled across an octopus settling in to brood her eggs. It seemed like a small moment. But as he went back to visit her, month after month, what began as a simple act of motherhood became a heroic feat that has never been equaled by any known species on Earth.

Listen to a new Radiolab podcast: Octomom – reported and produced by Annie McEwen.